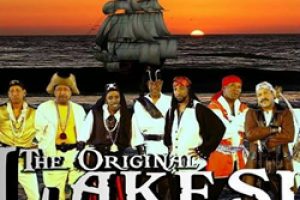 The Lakeside journey began when a group of high school students from Ohio formed a band made up of talented musicians and a ferocious stamina that has sustained them for more than 27-years. A feat not many bands can boast about. Formerly known as the Ohio Lakeside Express, their travel has taken throughout the world opening for legends like Redd Foxx, Eddie Kendricks and many others.
Recording moguls Motown, ABC and Solars have felt the Lakeside vibe producing many of the “Fantastic Voyage” mega hits that took the music industry by storm. The sound of funk hits such as “All The Way Live“, “Raid” and “Outrageous“, are known to draw people to the dance floor like a magnet to metal. The signature sound of the lead guitar on the hit “Something About That Women“, alarm your funk sensors to take immediate notice!! Lakeside’s soulful ballads demonstrate their versatility, style and perfect mix of vocals and band as recorded on the remake of the Beatle’s classic hit “I Wanna Hold Your Hand“. And of course, there is the Lakeside anthem that sets the band apart from all the rest. Brought back by Coolio, “Fantastic Voyage” boast to be the only song to knock Michael Jackson’s “Heartbreak Hotel” from the number one position on the Billboard Charts in 1980. The hit single “Fantastic Voyage“, continues to entertain new and seasoned fans on Lakeside’s latest LIVE CD featuring all of the great Lakeside hits that have made them a household name. Their LIVE CD is sure to attract you to feel the funk live and in person at a concert in your area!!
LAKESIDE band members include:
Fred Alexander, Jr. In 1974 Lakeside Express merged with Liquid Funk, which featured Fred Alexander on drums. Stephen Shockley. talented artist performing on Synthesizer, Guitar and Bells.Mark Woods was a member of the local Chicago band The Nomads, joined up with Stephen Shockley to form a more mature-sounding Young Underground.Marvin Craig Dayton, Ohio Native :Base player Marvin CraigWilliam Shelby:Dayton, Ohio Native: Talented vocals of William ShelbyFred Lewis Los Angeles, California Native: performs on Conga, Timbales, and Synthesizer Bass.Johnny Rogers: Los Angeles, California Native & Donald Tavie Los Angeles, California Native:
Undeniably THE BEST Funk Band performance you will ever witness!