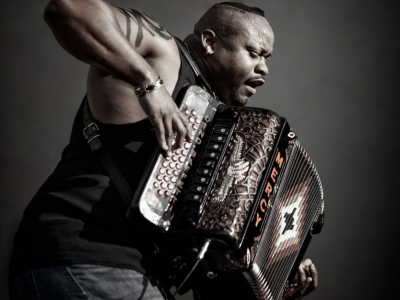 Dwayne (Dopsie) Rubin hails from one of the most influential Zydeco families in the world. Although inspired by tradition, Dwayne has developed his own high energy style that defies existing stereotypes and blazes a refreshingly distinct path for 21st century Zydeco music. This singer/songwriter and accordionist has performed all over the world since debuting his band, Dwayne Dopsie and the Zydeco Hellraisers, at age 19.

As a tribute to his late father, Rockin’ Dopsie, Sr., Dwayne will record an album of his Dad’s greatest zydeco hits. Dwayne and the Hellraisers are currently in the studio wrapping up their 6th studio album, a follow up to Up In Flames, their second album to be prenominated for a Grammy Award. The Louisiana native writes both the lyrics and music for his songs and describes the upcoming album as soulful with a touch of blues and old time zydeco feel. The new album will receive additional air time on Sirius XM satellite radio. The band plans to promote their album by touring both nationally and abroad and appearing on late night talk shows. 2015 will mark their 7th summer promotional tour in Europe, adding to the 70+ international festivals they have performed in the last 2 years.

Dwayne Dopsie, grew up in Lafayette, Louisiana, as well as four of the Hellraisers. Dwayne has created the perfect band of hand picked musicians. The washboard player, Paul Lafleur, possesses skill and timing that are unmatched, making him a true musician, not just a marvel holding a washboard. Combined, the band has over 100 years of experience playing Zydeco music and it shows in every performance. The energy, true talent, and exuberance that Dwayne Dopsie and the Zydeco Hellraisers emit from stage makes it obvious that there is no competition for this band.

Not only has Dwayne’s band mastered zydeco music, they also add a bit of rhythm and blues, funk, rock and roll, reggae and pop to their performances, making them a very versatile choice for any audience. This Indie artist was named “The Hottest Accordionist” in America for his ability to both work the crowd and pump out musical harmony in grandiose fashion. Dwayne doesn’t confine himself to the stage; he interacts with the crowd, blurring the barrier between performer and audience. Audiences jump to their feet energized by Dwayne’s musical innovation, charismatic performance and sheer, raw talent. His ability to capture the imagination, heart and soul of his audience makes Dwayne one of today’s most dynamic performers.

Adding this band to a festival or event line-up is a must and you, too, will be just as excited as your audience as Dwayne Dopsie and the Zydeco Hellraisers take you into the realm of their on-stage fury aka Dopsie Mania.