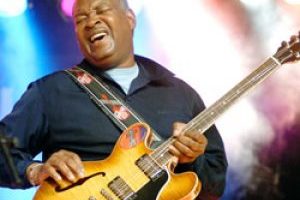 Weathersby was also nominated in 1997 for a W.C. Handy Award (now known as a Blues Music Award) for ‘Best New Blues Artist’.

Weathersby spent his early years in Meadville, Mississippi, a place he still considers home, although when he was aged eight, his family moved to East Chicago, Indiana.

As a teenager, Weathersby began to learn the guitar. One day, after practicing “Cross Cut Saw” many times through, he decided to show his father. After he finished playing it, his father’s friend, a man Weathersby knew as Albert, the diesel mechanic, said, “Man, that ain’t the way that song goes, that ain’t the way I played it.” The mechanic turned out to be Albert King, who then showed Weathersby how to play it. Despite Weathersby’s mistake, King was impressed and eventually signed Weathersby on to play rhythm guitar with him on tour.

However his career as musician started many years later. Before then, Weathersby worked many jobs ranging from steel mill worker to prison guard and police man. He also served in the U.S. Army from 1971 to 1977, during the Vietnam War.

After the Vietnam War, Weathersby began playing rhythm guitar with Albert King. It was only on short road trips between 1979–81, but the experience solidified Weathersby’s identity as a blues musician.

He then started filling in for the guitarist of the Sons of Blues, Carlos Johnson, who Weathersby described as “a pretty shaky guy, you know. He could show up just as easy as he couldn’t show up…” Eventually the band hired Weathersby on as their full-time guitarist, a position he held for the next fifteen years.

His position as guitarist for the Sons of Blues earned him a name among the blues fans of Chicago, it also left him feeling discontent.

Because of his growing popularity, Evidence Records released Weathersby’s first album, Don’t Lay Your Blues on Me (1996). They published all of his subsequent albums, up to Best of Carl Weathersby. His only live album, In the House, was recorded at the Lucerne Blues Festival in Switzerland, when he was joined by the harp player and past band mate Billy Branch. In The House was released under the CrossCut record label. Weathersby has since self produced the album, Hold On.