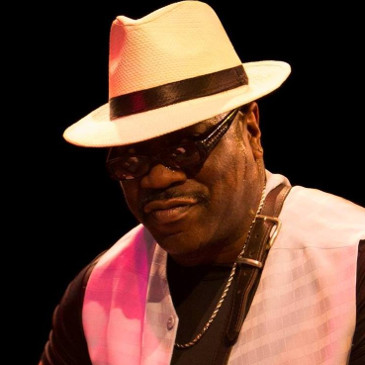 Big Bill Morganfield™ is the son of McKinley Morganfield (Muddy Waters) and has emerged in the past few years as one of the top blues talents in America. Bill has played all over the world in the past 15 years, bringing pure joy to those who have had the pleasure of seeing one of his live performances.Big Bill’s story is simply a great success story. Many have dreams, but so few have what it takes to make that dream a reality. He came from poverty and the odds were not in his favor. But, hard work, burning desire, perseverance, and strong religious convictions gave him the strength and focus needed to fulfill his dreams.

Many men try to fill their father’s shoes when they join the family business. Few, however, must prove they are up to the task in front of an audience as large as the one that watched Big Bill Morganfield™ come into his own.Morganfield didn’t take up the challenge until several years after his dad passed away in 1983. The blues world mourned the passing of Muddy. Muddy leaves not only a gaping hole on the blues scene but also a grief-stricken son who is contemplating how to handle the loss. Bill buys himself a guitar and retreats into a private world, intending to teach himself how to play and then pay homage to his famous father.

That tribute was six long years in coming; years that Morganfield spent teaching himself how to play the instrument. He studies the blues styles of the past. Says Bill, “I learned the old traditional blues, songs written in the 1930’s to the 1950’s.” An evening spent playing harp at Center Stage in Atlanta with Lonnie Mack followed. The audience, which numbered 1000, went wild over the performance and set the novice musician’s spirit afire.

The years of dedication and hard work paid off handsomely. Morganfield’s debut album, Rising Son, was released in 1999 to popular and critical acclaim. Guitar Player expressed their belief that Morganfield’s album would have brought a smile to his father’s face. The following year, the W.C. Handy Awards dubbed Waters’ son the Best New Blues Artist.In 2009, Big Bill Morganfield™ started his own record company, Black Shuck Records. Black Shuck Records is backed by VizzTone Label Group and serves as the backbone of Black Shuck Records. Bill’s new CD, Born Lover, was released July 7, 2009 on Black Shuck Records. CD co-producer (and Muddy Waters’ Band alumnus) Bob Margolin writes, “Big Bill Morganfield’s, Born Lover, reveals and celebrates his journey and progress as a Blues artist. I find that Bill still honors his father with deep Chicago Blues. He also tells his own stories with original songs, a wide variety of style, and fiery slide guitar. Bill’s singing has taken an exciting leap forward in both power and nuance. It’s a thrill to hear Bill fulfill.”In 2013 Big Bill released, “Blues With A Mood”, also on his own label, Black Shuck Records. However, this was done without the backing of VizzTone Label Group. “Blues With A Mood” reached the #1 position on Living Blues Radio charts in March of 2013 and has received great reviews all over the world.

In 2013 Big Bill won a Jus’ Blues Award for “Best Contemporary Blues Artist”. Also in 2013, Big Bill was inducted into the Blues Hall of Fame in St. Louis MO. as a “Master Blues Artist”.
When asked about his brand of blues, Bill exclaims, “I play real blues. Nothing but real blues and I play it with my heart, my soul and a little bit of Mud grease.”
In February 2017 Big Bill released,’Bloodstains On The Wall’on Black Shuck Records. Morganfield’s music reveals a life of the blues with traditional and modern twists, swing, boogie and slide that will place this new recording on the top of the Roots Charts.
Bloodstains on the Wall offers an expanded scope of the Blues. From the expected postwar chestnuts (associated with the likes of Otis Rush, Willie Dixon and Muddy himself) to gems like Lost Without Love and
Help The Bear.

His upcoming television appearance on FOX TV features him acting and performing the songs he penned for the series, ‘Shots Fired’. He has written & arranged original songs for episode 2 & 4 and rewrote the song, ‘Gonna Buy Me A Shotgun’ which he performs on his father’s guitar. “I am creating a fusion between Blues and Hip Hop. I believe that ‘crossover’ efforts like this are what it will take for the Blues to retain-or, more realistically, reclaim-its identity as American Black music,” says Morganfield. The music created for this series deals with police brutality in our nation targeting Black youth. This series aligns itself with Morganfield’s message
and his mission to reach out and touch somebody, his spirituality is the core of his music.
The surprise is Hold Me Baby the “bonus track,” a song Morganfield wrote and recorded for the upcoming Fox TV series Shots Fired. Updating Morganfield’s slide and rootsy vocals with electronically tweaked beats and hip-hop production, courtesy of noted studio maven C-Note, is sure to send chills down the spines of a lot of Morganfield’s long-time admirers.
The overall ambience, though, is pretty much the same. In places, the old Chess studio sound is recreated. Morganfield’s slide work also echoes Muddy’s, and so does much of his songwriting. When You Lose Someone You Love, is modeled closely on You Can’t Lose What You Ain’t Never Had-although in characteristic fashion, Morganfield makes it personal. It is a heartfelt meditation on his own grief over his mother’s death. Help Someone is a rollicking barnburner that sounds closer to New Orleans, or possibly Rosco Gordon era Memphis, than the South Side of Chicago.

The similarity between Bill Morganfield’s voice and his father’s is uncanny Excerpts from Living Blues Magazine Issue #246 . Volume 47, #6 December 2016 By, David Whiteis

Big Bill’s story is simply a great success story. Many have dreams, but so few have what it takes to make that dream a reality. But, hard work, burning desire, perseverance, and strong religious convictions gave him the strength and focus needed to fulfill his dreams.